Why Heywood From The Shawshank Redemption Looks So Familiar

If you’ve spent a decent amount of time flipping through your channels trying to find something to watch, then chances are you’ve seen the faces of the prisoners from The Shawshank Redemption about as often as Andy DuFresne (Tim Robbins) saw his poster of Rita Hayworth.

The film’s second life on cable has become the stuff of legend, and provided a late-arriving profile boost for many of its stars and supporting cast members, including character actor William Sadler. Sadler’s Heywood is the meanest of the film’s nice guy prisoners, the toughest sell among Red’s (Morgan Freeman) gang for Andy when he first arrives at Shawshank State Penitentiary. He delights in the small-time gambling over which new prisoner will crack first on Andy’s first night, and has little sympathy for Brooks (James Whitmore) after his suicide on the outside — though to be fair, Brooks chose Heywood to threaten with a knife in an effort to remain in prison. The gap between his high opinion of himself and his low intelligence leads to some of the film’s more humorous moments — he mispronounces Alexandre Dumas in the way you might guess — but Heywood is ultimately redeemed.

A rogue colonel in Die Hard 2 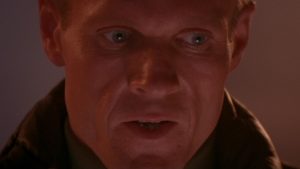 Back in 1990, Sadler played a disillusioned and fervently anti-Communist Army Special Forces colonel who takes control of Dulles International Airport’s air traffic control on Christmas Eve and holds the planes hostage in Die Hard 2. His character, Colonel William Stuart, means business, which you know by the way he practices martial arts in the nude in his hotel room in the movie’s opening minutes. His goal is to secure the freedom of General Ramon Esperanza, dictator of the fictional country of Val Verde, who is being extradited to the U.S. to stand trial on drug trafficking charges.


Unfortunately for Stuart’s plan, he chose to hijack the airport on a night John McClane (Bruce Willis) was in the building. Slowly but surely, McClane works out the details of Stuart’s plans. After forcing Stuart to evacuate the church his unit was using as a base, McClane learns that Major Grant (John Amos) — and the Army unit sent in to help end the threat — are allied with Stuart.

McClane chases down their taxiing escape plane via a news helicopter, and fights Grant and Stuart on the plane’s wing. Stuart’s exercise regimen pays off. He succeeds in knocking McClane off the plane, but fails to notice the fuel leak McClane caused, allowing the hero to ignite the trail of fuel and cause an explosion as the plane takes off. It’s the kind of stupid, overconfident mistake Heywood would make.

Death to Bill and Ted 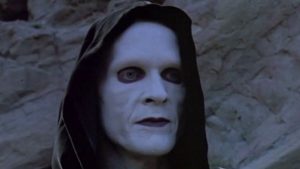 White-faced and black-hooded, Sadler’s version of the Grim Reaper from Bill & Ted’s Bogus Journey is an extended riff on the chess-playing personification of Death played by Bengt Ekerot from Ingmar Bergman’s The Seventh Seal. It’s perhaps an odd reference on which to prop so much of a comedy about two time-traveling, rock-loving dimwits, but Sadler makes it work.

After Bill (Alex Winter) and Ted (Keanu Reeves) are killed by evil robot versions of themselves, the Grim Reaper — he’s referred to both as that and simply as “Death” in the film — tells the pair that they can challenge him to a game in order to return to the land of the living. But he’s caught off guard when they pick an array of more modern games: Battleship, Clue, Electric Football, Twister. The pair vanquish Death each time, and he’s forced to live up to his end of the bargain. Apparently there are no hard feelings, since he ends up joining them on an upright bass for their concert finale.

Sadler reprised the role in 2020’s Bill & Ted Face the Music, appearing after Bill and Ted are once again killed. He’s seen keeping up with his penchant for amusing diversions, playing hopscotch and tetherball in his own personal corner of Hell. From his conversation with Bill and Ted, audiences learn he left the band, apparently in frustration, after being told to rein in his 40-minute bass solos. With the help of their daughters Billie (Brigette Lundy-Paine) and Thea (Samara Weaving), the pair reconcile with Death and he helps them escape Hell and return to the real world. 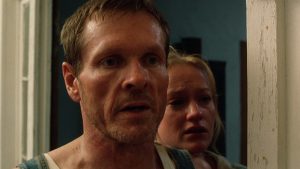 The Shawshank Redemption was only the first of many collaborations for Sadler with director Frank Darabont, in works adapted from Stephen King books. In 1999’s The Green Mile, Sadler had the small but crucial role of Klaus Detterick, the father who comes across John Coffey (Michael Clarke Duncan) holding the bodies of his two murdered daughters after his unsuccessful efforts to save them. Coffey, though innocent, would eventually be found guilty for their murders, which lands him on death row. In 2019, Sadler told Cinema Blend that his brief appearance was the hardest scene he ever filmed, because he was a relatively new father himself at the time, and he hated how going to that place emotionally made him feel.

Following this, in 2007’s The Mist — another King inspired film — Sadler played the mechanic Jim Grondin, one of many residents of Bridgton, Maine trapped in the grocery store by the mist and the deadly creatures that inhabit it. Jim is won over by the preaching of Mrs. Carmody (Marcia Gay Harden), who argues the mist is a form of divine retribution. Jim eventually helps Mrs. Carmody after she declares that some of those taking refuge in the store must be sacrificed to the mist, but comes to regret his actions after she is killed.

President of the MCU 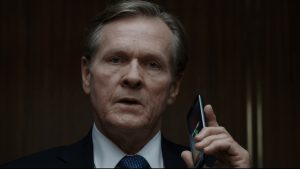 In 2013, Sadler took on the role of the President of the United States, in a world where the holder of that office was definitely not the most powerful person on the planet: the Marvel Cinematic Universe. His character, President Ellis, isn’t drawn from any comic storyline. He first appeared in Iron Man 3, challenged by the terrorist who calls himself the Mandarin (Ben Kingsley, sort of) and the series of untraceable bombings being carried out in his name. Ellis’ plan is to rebrand James Rhodes’ (Don Cheadle) War Machine as the Iron Patriot and send him to hunt down the Mandarin. It turns out to not be a good plan.

Tony Stark (Robert Downey Jr.) eventually learns the strange truth about the villain, but he’s unable to stop the powers behind the Mandarin from kidnapping President Ellis off Air Force One. The villain puts Ellis into the stolen Iron Patriot armor and plans to execute him on live television, but Ellis is saved by Rhodes.

Sadler would reprise his role as Ellis on multiple episodes of the television show Agents of S.H.I.E.L.D., and the web series WHiH Newsfront, which depict him dealing with the fallout of many of the MCU’s big geopolitical events, from the HYDRA uprising in Captain America: The Winter Soldier to the Inhuman Outbreak in Agents of S.H.I.E.L.D., to the Sokovia Accords from Captain America: Civil War.

PreviousWilliam Sadler on ‘Bill & Ted 3’ and His Most Excellent Advice for Actors
NextKeanu Reeves Reunited with Former Co-Stars in a Wild, Unrecognizable Cameo