I just found an interview Bill did with the Be More Super Podcast on Youtube. Here Bill and host Bryan discuss Bill’s storied career in motion pictures, television, the stage, and music. Bill is again charming and engaging as he recalls stories from his experience in making films and television. Enjoy.

The website That Hashtag Show has selected five double feature vids for you to spend your Halloween with. They mentioned specifically two of William’s films for your consideration. They selected TALES FROM THE CRYPT PRESENTS: DEMON KNIGHT where he played Frank Brayker, and VFW where he played Walter Reed. I’m so happy they focused in on these two classics from William’s filmography. And their praise for him made this gal’s heart melt. 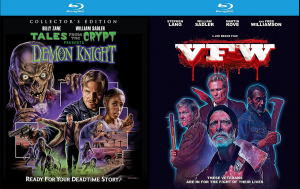 Now, you might be asking yourself, “what in the flying f*ck do these have to do with each other?”. There is a common thread among them. And that’s William Sadler. William Sadler being immeasurably badass. That’s really the only thing that connects these two, but I’m all for a Sadler-A-Thon. Demon Knight is a hugely underrated horror flick that gets lost because it’s a Tales From The Crypt spin-off from the 90’s. Don’t let that stop you from enjoying Sadler tussle with Billy Zane’s The Collector.

I’ve already reviewed VFW as part of Fright-A-Thon, so you can read that review right here. But it’s safe to say that Sadler gives another great performance in this film as well. It’s a classic feeling film made in 2019, so you can’t really get much better than that.