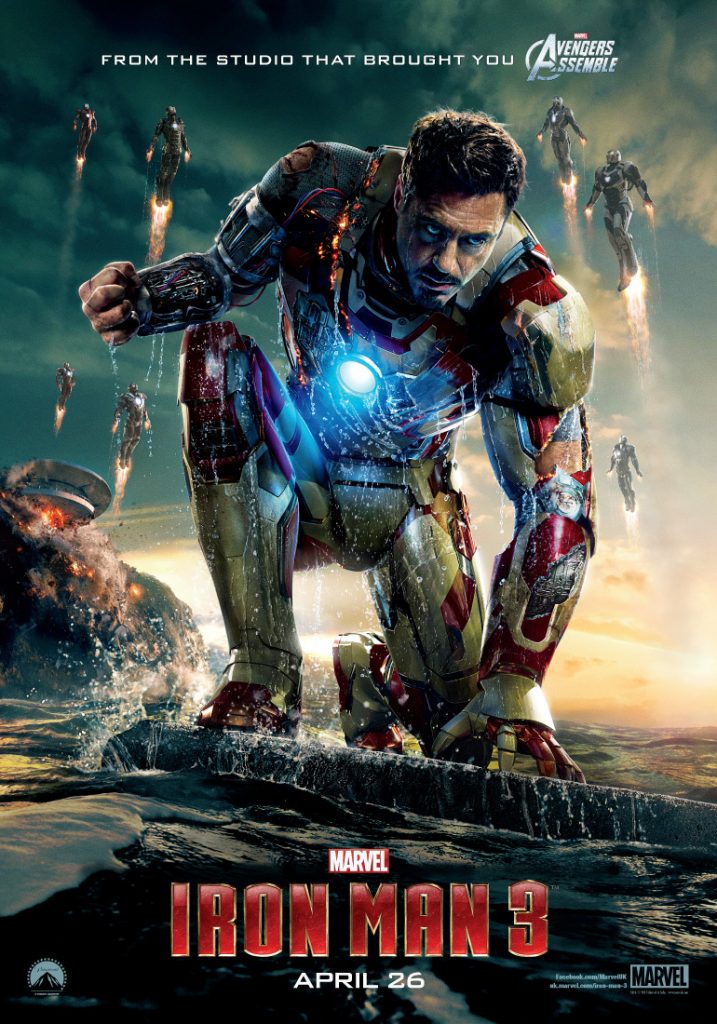 At a New Year’s Eve party in 1999, Tony Stark meets scientist Maya Hansen, the inventor of an experimental regenerative treatment named Extremis that allows recovery from crippling injuries. Disabled scientist Aldrich Killian offers them a place in his company Advanced Idea Mechanics, but Stark rejects him. In December 2012, seven months after the battle of New York, Stark is suffering from post-traumatic stress disorder and is having frequent panic and anxiety attacks due to his experiences during the alien invasion and subsequent battle.[N 2] Restless, he has built dozens of new Iron Man suits to cope with his insomnia, creating friction with his girlfriend Pepper Potts.

A string of bombings claimed by a terrorist known as the Mandarin has left intelligence agencies bewildered by a lack of forensic evidence. Stark’s security chief Happy Hogan is badly injured in one such attack at the TCL Chinese Theatre, prompting Stark to boldly issue a televised threat to the Mandarin, revealing his home address in the process. The Mandarin sends gunship helicopters to destroy Stark’s home. Hansen, who came to warn Stark, survives the attack with Potts. Stark escapes in an experimental new Iron Man suit, which his artificial intelligence J.A.R.V.I.S. pilots to rural Tennessee, following a flight plan from Stark’s investigation into the Mandarin. Stark’s new armor is not fully functional and lacks sufficient power to return to California, leaving the world to believe him dead.

Stark investigates the remains of a local explosion bearing the hallmarks of a Mandarin attack. He discovers the “bombings” were triggered by soldiers subjected to Extremis whose bodies explosively rejected the treatment. These explosions were falsely attributed to a terrorist plot in order to cover up Extremis’s flaws. Stark witnesses Extremis first hand when Mandarin agents Savin and Brandt attack him: Stark kills Brandt and incapacitates Savin. Meanwhile, Killian resurfaces and kidnaps Potts with assistance from Hansen. American intelligence agencies continue to search for the Mandarin’s location, with James Rhodes—the former War Machine, now re-branded as the Iron Patriot—lured into a trap to steal his Iron-Man-like armor.

Stark traces the Mandarin to Miami and infiltrates his headquarters using improvised weapons. Inside, he discovers the Mandarin is actually an English actor named Trevor Slattery, who is oblivious to the actions carried out in his image. Killian, who appropriated Hansen’s Extremis research as a cure for his own disability and expanded the program to include injured war veterans, reveals he is the real Mandarin behind Slattery’s cover. After capturing Stark, Killian reveals he has subjected Potts to Extremis in the hope Stark will help fix Extremis’s flaws while trying to save her. Killian kills Hansen when she tries to stop him.

Stark escapes and reunites with Rhodes, discovering that Killian intends to attack President Ellis aboard Air Force One, using the Iron Patriot armor, controlled by Savin. Stark kills Savin, saving the passengers and crew, but cannot stop Killian from abducting Ellis and destroying Air Force One. They trace Killian to an impounded damaged oil tanker where Killian intends to kill Ellis on live television. The Vice President will become a puppet leader, following Killian’s orders, in exchange for Extremis to cure his young daughter’s disability. On the platform, Stark works to save Potts, as Rhodes goes after the President. Stark summons his remaining Iron Man suits, controlled remotely by J.A.R.V.I.S., to provide air support. Rhodes secures the President and takes him to safety, while Stark discovers Potts has survived the Extremis procedure; before he can save her, a rig collapses around them and she falls to the platform below, causing Stark to believe her dead. Stark fights Killian, but finds himself cornered. Potts, whose Extremis powers allowed her to survive her fall, intervenes and kills Killian to save Stark.

Stark orders J.A.R.V.I.S. to remotely destroy all the Iron Man suits as a sign of his devotion to Potts, while the Vice President and Slattery are arrested. With Stark’s help, Potts’s Extremis effects are stabilized; and Stark promises to scale back his life as Iron Man, undergoing surgery to remove the shrapnel near his heart and throwing his obsolete chest arc reactor into the sea. He muses that, even without the technology, he will always be Iron Man.