Welcome to WILLIAM SADLER ONLINE @ williamsadler.org a website dedicated to American actor William Sadler. Best known for his various roles in differing projects, William has played everything from an anarchist military man in DIE HARD 2: DIE HARDER to a fireman seeking gold in TRESPASS, to a convict in THE SHAWSHANK REDEMPTION, a soldier for God in TALES FROM THE CRYPT: DEMON KNIGHT, and a member of a secret organization inside The Federation in DEEP SPACE NINE. But his most 'infamous' role has been as the Grim Reaper/Death in BILL & TED'S BOGUS JOURNEY, AND BILL & TED FACE THE MUSIC. William has many other film credits to his name including THE MIST, THE HOT SPOT, RUSH, THE GREEN MILE, KINSEY and many more. William has also become a staple in episodic television including as Sheriff Jim Valenti in the CW's ROSWELL and in HOMELAND, POWER, BERLIN STATION, THE COMEY RULE and lends his voice to the Comedy channel's OUR CARTOON PRESIDENT. William also has an extensive career on the stage in such productions as JULIUS CAESAR, 24 HOUR PLAYS, EXIT THE KING and many more. This site is dedicated to giving you the most up-to-date information on William's career. Do not expect candids to be posted as this site supports William's wishes for privacy. To read what will or won't be posted, feel free to read this site's Candids policy.
WILLIAM SADLER ONLINE > William Sadler > William Sadler – The Tribute 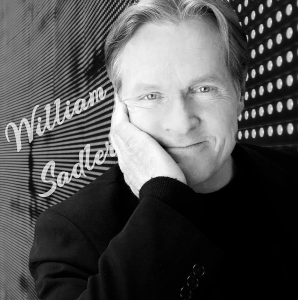 William Sadler has the kind of face one knows, but sometimes can’t place. Considering the number of credits he has on his IMDB page, it’s surprising he’s not known more than he is. One thing he is, is reliable. Sitting down to watch one of his films or a guest appearance on episodic television, one knows we’re going to get excellence from William. He’s just that good.

When trying to remember the fist time I saw William Sadler, one would have thought it was one of his bigger roles such as Col. Stuart in DIE HARD 2, or as Brayker in DEMON KNIGHT or Don in TRESPASS, but for me I now know it was further back than that. It was while I was watching an episode of the CBS sitcom NEWHART The part was credited as “Clumsy Guest”. I do remember the part when he comes down the stairs of the Stafford Inn and slips on the stairs landing at the bottom of the landing, then grabbing the baluster pulling it out of baserail. That character was one of many who had only one scene and was never seen again, but he was funny. The next time I saw him was likely as Col Stuart.